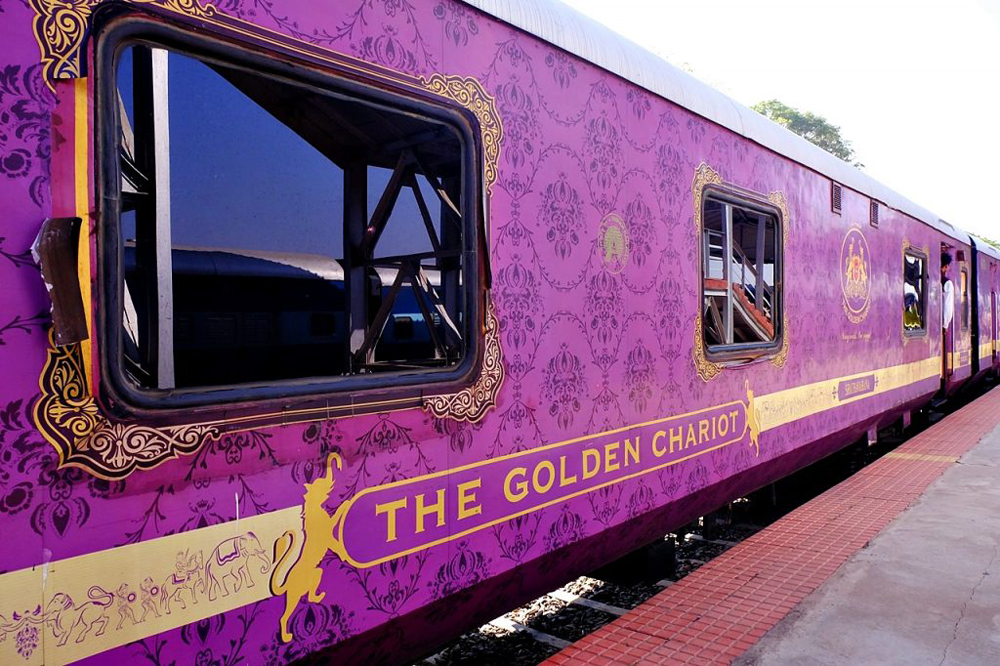 The Golden Chariot is a luxury tourist train that connects the important tourist spots in the Indian states of Karnataka, Goa, Kerala & Tamil Nadu as well as Pondicherry, depending on the selected itinerary. It is named after the Stone Chariot in the Vitthala Temple at Hampi. The 19 coaches on the train are coloured purple and gold, and sport the logo of a mythological animal with the head of an elephant and a body of a lion. The Golden Chariot is operating between the months of October–March for 2015/16 season with a departure every week, on Monday and had its maiden commercial run on 10 March 2008. The train, along with the Deccan Odyssey, is designed on the lines of the more popular Palace on Wheels with accommodations, spa treatments and dining. It has been awarded the title of "Asia's Leading Luxury Train" at World Travel Awards, 2013 The train is operated by the Karnataka State Tourism Development Corporation and The Maple Group handles the hospitality services on the train.

Day 3 :Wed: Morning: Kabini Boat ride & depart for Mysore
Early morning 630 am proceed for boat ride in Kabini River,to site crocodiles sunning themselves & many hued birds flitting in & out of the forestâ€™s green canopy. Return back to Jungle Lodge for breakfast & check-out by 930 am to drive back to Mysore railway station (2 hrs) to board the train

Day 4 Thu Morning: Shravanabelagola Monolith
Early morning train departs from Mysore to Hassan Railway station & at 9.am. proceed for excursion (1.5 hrs one way) to Shravanabelagola village. Climb 700 steep steps, carved in a stone hillock to view 10th century built statue of Jain Monk Gommateshvara Bahubali an architectural marvel towering 58 feet high,Later, climb down the steep steps to board your bus standing at base of the hillock & drive back to Hassan Railway station to board the train by 1p.m. for lunch & brief rest.
NOTE: Guests unwilling to climb the steep steps can stay back on board The Golden Chariot

Day 5: Fri Afternoon: HAMPI Temples
At 3.30 p.m. proceed for excursion (30 minutes one way) to 16th century built temple complex of Vithala, dedicated to Hindu God-Lord Vishnu. In courtyard of the main temple is a massive Stone Chariot ,after which Golden Chariot train has been named. The stone wheels of the Chariot can be rotated ,but have been cemented by authorities to avoid damage.

One of the most notable features of Vittala temple are the musical pillars. Each of the pillar that support the roof of the main temple is supported by a pillar representing a musical instrument, and is constructed as 7 minor pillars arranged around a main pillar. These 7 pillars, when struck, emanate the 7 notes from the representative instrument, varying in sound quality based on whether it represents a wind, string or percussion instrument. Time free to sit on banks of nearby located Tungabhadra River for sunset view. Depart by 6 p.m. back to Hospet Railway station to board the train for dinner & depart

The Pattadakal Temple complex, built between 7th to 9th Century offers 10 temples built in fusion of various Indian Architectural Styles. There are numerous Kannada language inscriptions on the temple walls.

Return back to Badami Railway Station by 130 pm & depart for Goa, Lunch & Dinner onboard
Afternoon at leisure to enjoy the country side.

Open All Close All

Day 1: Fri Evening
By 8 p.m. Self report at Yashwantpura Railway Station, Bangalore for check in formalities of Train.
Dinner on board & Train departs by 9 p.m. for Hospete ///

Day 2: Sat Lunch
Enjoy lunch in at Orange County Resorts â€“built like a fort with stone-paved boulevards, arched hallways and regal chambers that mirror the famed palaces of a bygone but glorious era///

Day 3 Morning
Check out after onboard breakfast by 8 a.m. at Yashwantpura Railway Station,Bangalore