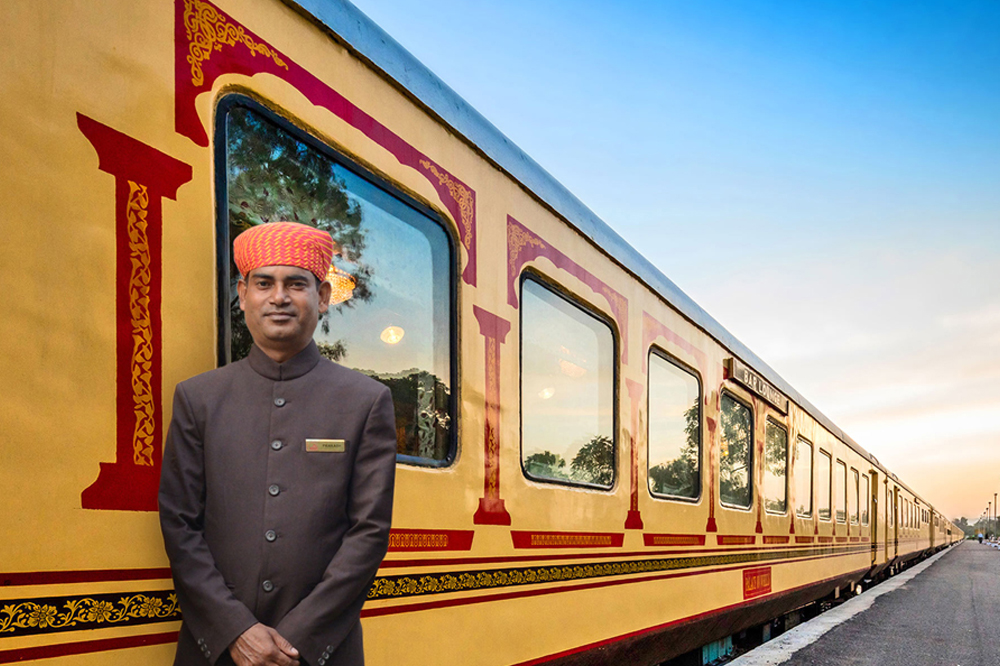 Welcome to Palace on Wheels

A traditional welcome with garlands and vermillion awaits passengers who board the Palace on Wheels. This luxury train starts in Delhi and loops through many famous tourist attractions in Rajasthan, before returning to Delhi via Agra. Its elegant saloons, restaurants serving Rajasthani and continental cuisine, and furniture with inlay work take passengers back to a time when maharajas ruled the land. Palace on Wheels showcases the best heritage and wildlife along India’s Golden Triangle, including the grandeur of Hawa Mahal and Amber Fort in Jaipur, the wilderness of Ranthambore National Park, the timeless sands of Jaisalmer and Jodhpur, and Agra’s centrepiece the Taj Mahal.

•   The above tariff is subject to revise without prior notice

India's capital city, Delhi depicts the myriad colours of different kinds of lifestyles that are a mix of contemporary and traditional sensibilities. It is a reservoir of cultures, traditions and politics. A visit to its several architectural masterpieces of ancient and medieval times, is always a delight.

1600 HRS: Report at Safdarjung Railway Station for check in formalities.

1930 HRS: Dinner aboard the royal Palace on Wheels.

Founded in 1727 and the former capital of the Kachwaha rulers, Jaipur today is a versatile tourist destination. Famed as the 'Pink City', this capital city of Rajasthan boasts of a rich historical past that is depicted in its forts, palaces, havelis and its colourful bazaars.

0830 HRS: De-board the train for an excursion tour to the city.

1330 HRS: A tantalizing lunch at the Amber Fort.

1800 HRS: Embark the train again for tea and leisure.

2200 HRS: Returning to Palace on Wheels for onward journey to Sawai Madhopur.

Sawai Madhopur is a beautiful city of Rajasthan, which is extremely popular for housing the world-renowned Ranthambore National Park. The UNESCO World Heritage Site of the historic Ranthambore Fort is an added attraction. It was a planned city that was founded by Maharaja Sawai Madho Singh I of Jaipur.

CHITTORGARH - Popular for the tales of valour and romance of its erstwhile royalty, Chittorgarh was the former capital of the Sisodia clan of Mewer. Placed on the banks of rivers Gambhiri and Berach, this city has magnificent forts, ruined castles and glorious royal structures. Chittorgarh has a total of 7 huge entries.

0530 HRS: Arrival in the Railway Station of Sawai Madhopur.

1030 HRS: A departing journey to Chittorgarh.

1300 HRS: A royal lunch aboard Palace on Wheels.

1630 HRS: A sightseeing tour to the Chittorgarh Fort.

1800 HRS: Evening tea and other refreshments at the cafeteria of Chittorgarh Fort accompanied by a beautiful light and sound show.

1930 HRS: Return back to the royal Palace on Wheels.

2000 HRS: A royal dinner at hotel Panna along with a cultural show.

2200 HRS: Returning back to the royal carriages of the train for an overnight stay.

Also known as the 'City of Lakes' Udaipur is called Rajasthan's most romantic city because of its picturesque setting, Rajputana palaces and lakes. The erstwhile capital of the Mewar kingdom, Udaipur was founded in 1553 by Maharana Udai Singh II. The city boasts of innumerable tourist attractions.

0200 HRS: Leaving Chittorgarh for an onward journey to Udaipur.

0815 HRS: A refreshing breakfast in a deluxe hotel.

1430 HRS: A venturous boat ride in the lake Pichola.

1930 HRS: A deluxe dinner aboard Palace on Wheels.

Nicknamed as the Golden City, the city of Jaisalmer is very well-known for its Jaisalmer fort. This city has been named after Maharawal Jaisal Singh, a Rajput ruler who had established the city in 1156 AD. The city every year hosts its annual Dessert Festival, which is a major crowd puller.

0915 HRS: Disembark in Jaisalmer for a sightseeing tour to the city.

1330 HRS: Either an onboard lunch in Palace on Wheels or at the deluxe Moomal hotel.

1530 HRS: Tea and refreshments in the sand dunes of Jaisalmer along with a camel ride.

1930 HRS: A royal dinner in the sand dunes accompanied by a colorful cultural program.

2300 HRS: Returning to the train for an onward journey to Jodhpur.

Also known as the 'Sun City' and the 'Blue City', Jodhpur was the erstwhile capital city of the kingdom of Marwar. Now a popular tourist destination, this city is quite famous for its proximity to the Thar desert and for its magnificent forts. It is dotted with innumerable attractions, worth visiting.

0730 HRS: An onboard breakfast in Palace on Wheels.

0900 HRS: A tour to the city attractions of Jodhpur.

1530 HRS: Return back to the train for relaxing and a ride to Bharatpur.

1930 HRS: A dinner onboard royal Palace on Wheels.

Considered to be an impregnable city, Bharatpur was the erstwhile capital of the Jat Kingdom and now is a famous tourist destination. Also called Lohagarh, this city houses the very well-known Keoladeo Ghana National Park or Bharatpur Bird Sanctuary. This sanctuary is a haven for bird watchers.

Situated on the banks of river Yamuna, the Mughal city of Agra also finds its mention in the Hindu epic of Mahabharat. The city houses 3 UNESCO World Heritage Sites, including the Taj Mahal, one of the Seven Wonders of the World. The city is a blend of the old and the new worlds.

0730 HRS: A breakfast in a deluxe lodge in the forest.

1330 HRS: A delightful lunch in a deluxe hotel in Agra.

2000 HRS: Dinner in a luxury hotel in the city or aboard Palace on Wheels.

0730 HRS: An onboard breakfast followed by checkout and farewell formality

Open All Close All

Sightseeing tour of Delhi- after disembarking from the train.

tour of Old and New Delhi. This fascinating city has been in existence since the 6th century BC and has seen ups and downs from the rule of the Pandavas right up to the British Raj. Visit Jama Masjid, which is the largest mosque in India, commissioned by Emperor Shah Jahan. The courtyard of the mosque can hold about 25,000 worshippers. Enjoy a rickshaw ride in Chandni Chowk, the busiest market in Old Delhi…noisy, chaotic and uniquely Indian. You will then visit drive past to the Red Fort, which was constructed during the rule of Emperor Shah Jahan and served as the residence for the Mughal royal family. It continues to be significant till date, as every Independence Day, the Prime Minister makes a speech from its ramparts as the Indian flag is hoisted. Later, drive past to India Gate, President House and several other government buildings in Edwin Lutyen’s Delhi before you head toward Rajghat, the memorial to Mahatma Gandhi. This simple memorial marks the spot where Mahatma Gandhi was cremated in 1948. Thereafter, visit Humayun’s Tomb, commissioned by Humayun’s wife Hamida Banu Begum in 1562. It was the first garden tomb built in the Indian sub-continent where the Persian architect used red sandstone on a large scale.